With 2020 being the Beethoven Year, celebrating the 250th anniversary of his birth, the SSO is exploring his musical genius – and while we instantly think of Beethoven when it comes to symphonies and piano sonatas, his cello sonatas should not be overlooked!

For those new to exploring the music of Beethoven, these sonatas provide a good overview of the three broad periods (Early, Middle and Late) of Beethoven’s development as a composer. As such, they also span the time period and style changes between the end of the Classical era and the beginning of the Romantic era.

The sonatas were titled with the pianoforte listed first with “violon-celle oblige”. This seems fitting given the less important role the cello has in the first two sonatas, early works from Op. 5. These pieces would have served as a novel combination of instruments while still showcasing Beethoven’s own keyboard mastery. Musically, they sound like most early Beethoven – an extrapolation of late Mozart and Haydn. They were inspired by the French cello virtuoso Jean Pierre Duport whom Beethoven met in 1796. Overall, they are not very virtuosic pieces by Duport’s cello standards, but they are brilliant compositions with flashes of technical difficulties that Beethoven was famously indifferent to.

The third cello sonata, Op. 69, is from Beethoven’s most well-known and celebrated Middle period. The cello part is much more prominent than Op. 5 and similar to the violin sonatas in terms of the balance between the two instruments. This is one of the most loved and often performed pieces for cello and piano in the entire literature, beginning with the famous opening where the cello starts the piece alone for the first 6 measures. It is challenging but well written for the cello. This is powerful, gripping music of the artistic calibre of his 5th Symphony.

The Op. 102 sonatas were written in 1815, soon after Beethoven’s deafness had ended his public performances as a pianist. While they are not as inscrutable as his late string quartets, they are more eccentric than the first three cello sonatas. Even contemporary reviewers who loved Beethoven’s music found these two sonatas somewhat inaccessible for the first time listener. Like parts of his 9th Symphony, the music ranges from serene beauty to insistent, almost bombastic passages. Late Beethoven is not everyone’s cup of tea, but after several hearings these works can be appreciated in light of, if not an expression of, the unique frustration and pains of his deafness and declining health.

These five sonatas are some of the pillars of the cello repertoire and also give the listener an introduction to the wide stylistic expanse of Beethoven’s evolution as a composer – and human being. 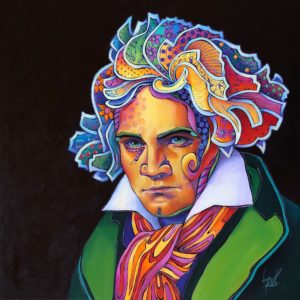