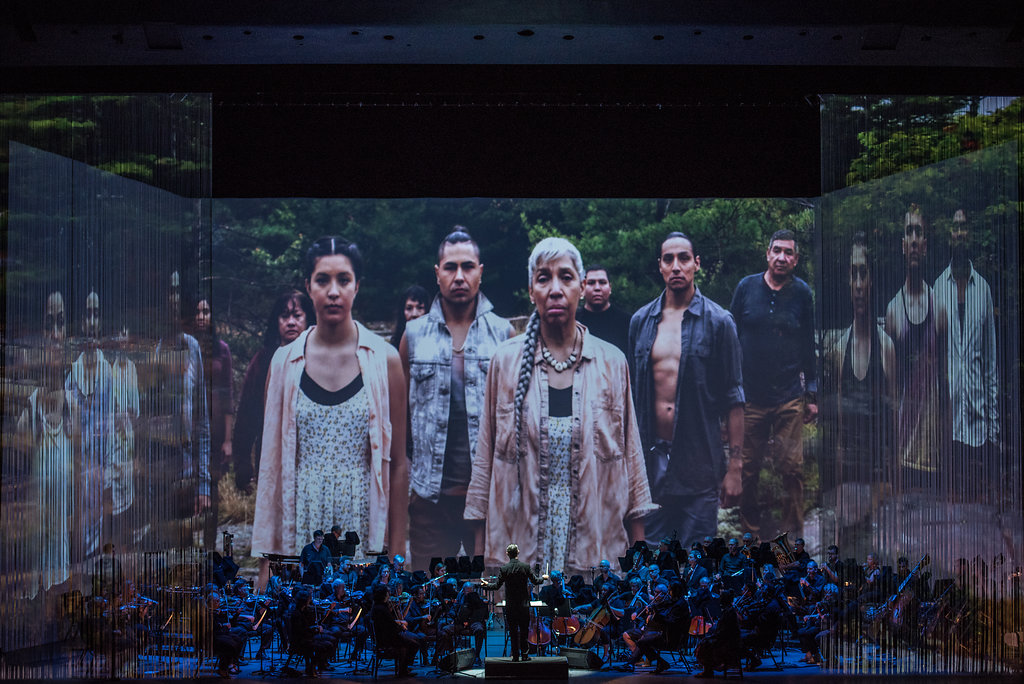 I Lost My Talk is based on the poem by Mi’kmaw elder and poet Rita Joe, C.M. Rita Joe penned her poem to express not only the pain and suffering she experienced at Schubenacadie Residential School in Nova Scotia, but also her hope and conviction that her words could guide and inspire indigenous and non-indigenous peoples across Canada to journey to a place of strength and healing. NAC award composer John Estacio has created a lush musical score which is performed in synergy with a film by world-renowned director Barbara Willis Sweete.

Commissioned for the National Arts Centre Orchestra to commemorate the 75th birthday of the Right Honourable Joe Clark, P.C., C.C., A.O.E. by his family.

I Lost My Talk by Rita Joe

I lost my talk
The talk you took away.
When I was a little girl
At Shubenacadie school.

Two ways I talk
Both ways I say,
Your way is more powerful.

So gently I offer my hand and ask,
Let me find my talk
So I can teach you about me.

Alexander Shelley reflects on the creation of I Lost My Talk

In a way, we spend our lives searching for our sense of self. For most of us it is a slow burn, an adventure explored on our own terms, in our own time. For others, the sense of self is challenged brutally and abruptly – violently even. We see it across the world on a daily basis – peoples torn away, displaced, their cultures threatened as they yearn for a home that no longer exists.

This powerful performance explores the themes of exile, resistance and displacement and ultimately celebrates the triumph of the human spirit over adversity.

The great Mi’kmaw elder and poet Rita Joe, C.M. – as with the other composers on our program – faced an insidious attack on her identity and did so with honour, wisdom, integrity and enormous compassion. Her powerful message of hope encourages peaceful reconciliation and was the inspiration behind this unique symphonic experience that combines music, motion and film.

As soon as I read “I Lost My Talk”, I knew that I wanted to engage with it, that I wanted it to be part of our creative lives, that I wanted us to carry her beautiful and dignified message to our audiences both nationally and internationally. Importantly and poignantly, her message also transcends its Canadian roots at a time when more and more people of different heritages are having to learn to listen and to understand

Rita Joe’s poem I Lost My Talk is mother to all the creative collaborations that make up this performance. It was my goal to unite each artist through their unique response to Rita Joe’s words — Rita’s language. No matter how disparate their disciplines, we would find ways to communicate, to inspire. Music is a language. Dance is a language. Film is a language. All three are universal. Rita’s is not. Rita’s is intensely personal and painful. And yet her story must be told and retold for it touches us, universally. Rita Joe is our Elder. I hope what follows proves with what devotion we have begun to listen.

John Estacio describes his composition I Lost My Talk

A bucolic flute solo captures the narrator’s life prior to attending Shubenacadie Residential School. Strings play a hymn that suddenly transforms into a harsh musical environment; the flute melody is now fractured and lost within a foreign tonal soundscape.

Throughout the second movement, as shattered musical themes recover, the percussion and lower brass frequently interrupt, forcing the melody to regroup and move forward into an atmosphere that becomes relentlessly oppressive.

With the words “you snatched it away,” an aggressive third movement begins; the solo flute returns, swept up in frantic momentum. A percussion solo ushers the return of the hymn, now fraught and anguished. With the text “two ways I talk,” the hymn is played in two different keys simultaneously.

With “I offer my hand,” the noble fourth movement begins; here, an anthem for reconciliation soars as the narrator finds the courage to act as an ambassador, bringing peace and understanding to two different cultures as well as her own life.