It’s not everyday a stellar 19 year old pianist comes to town, and even more rare that they give their first performance of a concerto that is new to their repertoire.  March 24th we’re thrilled to be joined by Anastasia Rizikov for the Saint-Saens Piano Concerto No. 2.

Canadian pianist Anastasia Rizikov is a remarkably poised and precocious seventeen year old who is already showing signs of being “one to watch”. At age seven, she made her orchestral debut, and has since appeared as soloist with major orchestras of North America and Europe. In 2015 alone, Ms. Rizikov won first places at the Jaén International Piano Competition and the Ettore Pozzoli International Piano Competition, recorded a CD with NAXOS, and performed at the Verbier Festival in Switzerland. 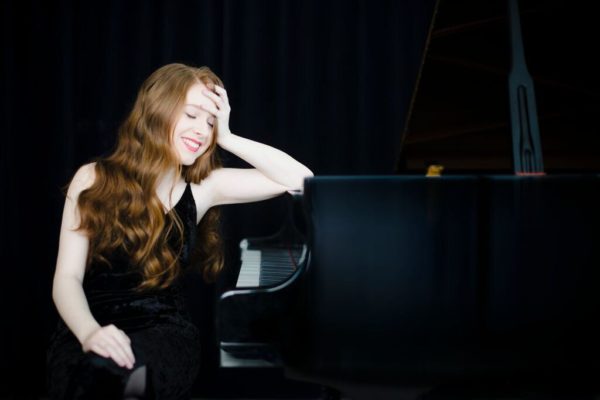 Anastasia’s concert schedules have taken her to Asia, all over Europe – Spain, Italy, Switzerland, France, Poland, Ukraine, Russia – the United States, and Canada, where she has played in such prestigious halls and spaces such as Carnegie Hall, Roy Thomson Hall, Koerner Hall, Fazioli Hall, Auditorio Manuel de Falla, Hong Kong City Hall, and the Kremlin. In 2015, Ms. Rizikov performed in major international music festivals like the Orford Music Festival, and the Verbier Music Festival. In the fall of 2013, Anastasia gave 20 performances over two weeks throughout all the Atlantic provinces of Canada as winner of the prestigious Debut Atlantic Award.

Anastasia Rizikov studies with award-winning professor Maia Spis, teacher at the Nadia Music Academy in Toronto. Since beginning her studies at the age of five, she has shown unparalleled dedication to both practice and performance. Ms. Rizikov has played in master classes for Sergei Babayan, Arie Vardi, Robert Levin, Ferenc Rados, Anatoly Ryabov, Oxana Yablonskaya, and has worked with András Schiff, Emanuel Ax, Menahem Pressler, Gabor Takács-Nagy, and Olga Kern.

In December, 2012, in honor of Glenn Gould’s 80th Anniversary Year and his Grammy Lifetime Achievement Award, The Glenn Gould Foundation has provided a C1X Yamaha baby grand piano Anastasia. She has the piano on an indefinite loan-basis to aid in her artistic and career development.

Adept in English, Russian, Ukrainian (and working towards mastering her French), Anastasia has given interviews for many major newspapers as well as live television shows. She is fanatic about literature – reading being “an escape from reality and entrance to a very different world, where my imagination goes wild”, and is enthusiastic about art. Being a person who loves and understands her audience, she dreams of being able to share her unique musical voice with the entire world