It’s sometimes easy to forget that the iconic Joni Mitchell grew up here in Saskatoon – in fact, Saskatoon and the Canadian prairies make many appearances in Joni’s catalogue of songs.  In Cherokee Louise we hear her talk about the Broadway Bridge, and Paprika Plains is a hymn about her love for the plains. 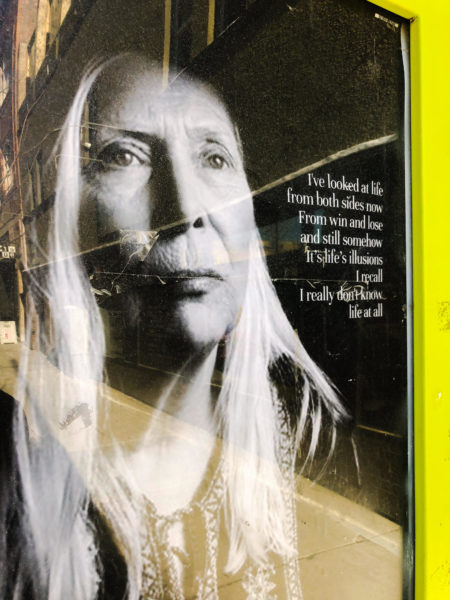 To coincide with the SSO’s performance of Joni’s music from her albums Both Sides Now and Travelogue, we partnered with DTNYXE for a photo display along 2nd and 3rd Aves downtown.

The photos bridge Joni’s more than fifty year career, and each is paired with a line from her legendary song Both Sides Now.

“The title of the concert, Don’t Give Yourself Away, comes from a line in Both Sides Now,” says SSO Executive Director Mark Turner.  “There’s such an incredible passion in her eyes that is present no matter what year the photos were taken.  And her orchestral jazz recording in 2000 of Both Sides Now show that, like her eyes, her search for art and life never faded in her music and lyrics either.”

The posters are on display until March 5th – take a walk all the way down 3rd Ave to read from the first lines, “Rows and flows of angel hair” to the end of the song.

“She deserves so much more celebration than we’re able to give her, but we felt so compelled to bring this music to life as her orchestral jazz albums are amongst the best the genre has ever offered.”