With holiday preparations in full swing, the SSO would love to give you some Christmas cheer on Saturday, December 7th! Our cocnert Christmas with the SSO will feature many guests with the orchestra, including two very special people… 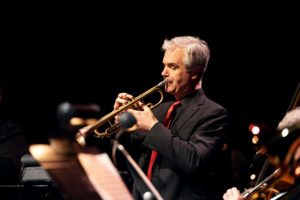 He should look familiar!

Dean McNeill has been with the Saskatoon Symphony Orchestra for over 20 years, and it is our pleasure feature him in this concert.

As a Yamaha artist, Dean has performed as a guest artist with the National Youth Band of Canada, as well as with professional ensembles such as the Winnipeg, Edmonton, Vancouver Jazz Orchestras and the Calgary Creative Arts Ensemble. He has performed alongside the likes of Kenny Wheeler, Pat LaBarbera, Michael Cain, Hugh Fraser, Tom Banks, Brad Turner, Kelly Jefferson, David Braid, Bob Mintzer, Denzal Sinclaire, PJ Perry, Ingrid Jensen, Jon Balantyne, Campbell Ryga and many others.

You can hear more of him on his two albums Prairie Fire: Large Jazz Ensemble Music of Dean McNeill and Mélange: New Music For Trumpet and Piano, and most recently composed repertoire on Complete Rebirth of the Cool.

Performing artist Elly Thorn was raised in the small Saskatchewan community of Saltcoats. Typical of rural life, Elly took music lessons as a way to fill the long, hot prairie summer and cold winter days that keep you stuck indoors. She began her musical career touring with Saskatchewan Express, as well as the Canadian Heritage Society’s Spirit of a Nation.

Elly studied at the Canadian College of Performing Arts in Victoria, B.C, performed aboard Norwegian Cruise Lines, has acted in TV series like Rabbit Fall and Corner Gas, and appeared in stage adaptations of Evita and Toon Town with Saskatoon’s Persephone Theatre.

With the performance on December 7th as Elly’s debut with the SSO, we will welcome her original compositions and hope to share her excitement with the audience as she lives through this songwriter’s dream. You will even have the opportunity to take home her newest album of Christmas music, releasing the night of the concert!

Spoiler – one of the songs that will be featured that evening will be “There’s a Heaven”, and will be great reminder to cherish all the good family moments that you can:

I wrote is this song almost four years ago, two days after I heard about a young family whose lives were taken in a car accident.  The tragedy shook me to the core because we also had little ones of similar ages.  We were in the midst of putting away Christmas for the year, feeling that excitement and love as the festive season once again comes to a close when I heard the news.  I felt broken and shaky, without even knowing who they were. We are all so connected, even more than we realize – we feel each others pain, energy, joys and brokenness… but we heal together too. I am a great believer that music heals.

Check out this recent tribute of Elly’s to what can often be a very “busy” time of year.

Christmas with the SSO