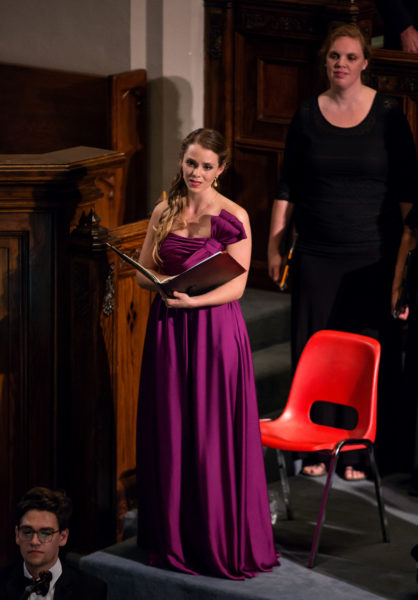 We’re thrilled to have soprano Allison Walmsley returning home to perform with the SSO for our Messiah performances.

Allison Walmsley is a Toronto-based soprano acclaimed for her “extensive upper register and resonate bottom” and is known to be a “natural and alluring actress” -Ludwig van Toronto. Hailing from Saskatoon, Sk, Allison completed her Bachelor’s degree in voice performance at the University of Saskatchewan under Dr. Garry Gable and Kathleen Lohrenz Gable. In April 2017, Allison completed her Masters of Music degree in voice performance at Western University under soprano Jackalyn Short, with whom she continues to study. While at Western University and abroad, she had the privilege of working closely with a number of coaches and mentors including John Hess, Dáirine Ní Mheadhra, Tyrone Patterson, Rosemary Thompson, Alain Trudel, Michael Cavanagh and James Conway.

Allison is a regular participant of competitions and festivals such as the Saskatoon Kinsmen Music Festival (2014) where she received first place, Gordon Wallis Opera Competition first place (2016), Maritsa Brooks Concerto Competition finalist (2016), Canadian Sinfonietta Concerto Competition finalist (2018), and she won the 2014 CFMTA Young Artist Competition/Recital Tour, along with duet partner Lindsay Gable.
Opera is a huge focus for Allison and some recent roles include Morgana in Alcina (AEDO), Queen of the Night in Die Zauberflöte (Opera Kelowna, Western Opera), Nanetta in Falstaff (Western Opera), Cat in The Bremen Town Musicians (Saskatoon Opera), Emily in Our Town (Opera NUOVA) and Lucy in The Beggars Opera (U of S Music Theatre Ensemble). She recently took part in an intensive weekend with MYOpera, one of Toronto’s vibrant indie opera companies. Allison looks forward to some upcoming opera projects including two Canadian works and an old classic: Ella in The Colour of Pain (Unexpectedly Opera), Kate in The Covenant (Vera Causa), and Zerlina in Don Giovanni (Little London Community Opera). Contemporary music and recital work is extremely important to Allison as well, and this recently culminated in a themed song recital with friends and collaborative pianist Natasha Fransblow, entitled ‘Songs to the Moon.’

After growing up in the Saskatoon Children’s Choir, Allison has been both chorister and soloist in several choirs including London Pro Musica Choir, Arcady Ensemble, and Greystone Singers. She sings professionally with Pax Christi Chorale in Toronto, and continues to be a featured soloist with their group. Some recent oratorio highlights as soprano soloist include Handel’s Messiah (RSO, 2017) Bach’s Magnificat (SSO, 2018), Beethoven’ Chorale Fantasy (Toronto Mozart Players/Pax Christi Chorale, 2017) and Schubert’s Mass in G Major (LPMC, 2017). Allison is thrilled to be joining the SSO for some Handel this December and looks forward to sharing in the amazing story that is Messiah.