Have you ever been listening to Handel’s Messiah and thought “wait, is that Joy to the World?” 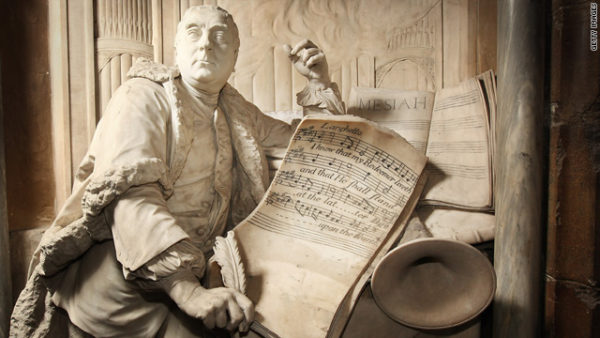 Well no, you’re not hearing Joy to the World, but you’re not completely wrong.

Joy to the World is considered to be the single most published Christmas song/hymn – its been recorded and performed by every choir, orchestra, soloists, jazz trio, pop artist, and even a rap group or two.  It’s one of those songs that everyone knows.  But who wrote it?

English hymn writer Isaac Watts wrote the words to Joy to the World in 1719 – by that point he was already noted for his work as a hymnist.  Watts’ words for the Christmas anthem eventually became paired with a few musical settings, but one stuck.

The music’s origins are unclear. The name “Antioch” is generally used for the tune. It is often attributed to George Frideric Handel (1685–1759) on the grounds of a ‘chance resemblance’ to choruses in the oratorio Messiah (premiered 1742), not least because a theme of the refrain (And heaven and nature sing…) appears similar to the orchestral opening and accompaniment of the recitative Comfort ye. Likewise, the first four notes seem to match the beginning of the choruses Lift up your heads and Glory to God from the same oratorio. However, there is no autographed score by Handel and no currently known documentary evidence to suggest that Handel wrote it, so ‘Antioch’ remains, at best, a skillful collection of borrowings from Handel.

Other hymnals credit the tune to Lowell Mason (1792–1872), who introduced it to America (US) in 1836 as ‘arranged from Handel’. But, in 1986, John Wilson showed that ‘Joy to the World’ was first published in two English collections, one firmly dated 1833. Being three years earlier, this is thought to exclude Lowell Mason from being the composer, but his original attribution remains a likely cause of the often-stated link to Handel.