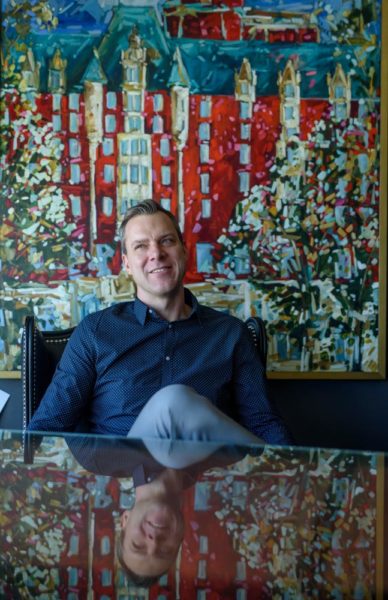 In just a few short years Canadian Eric Paetkau (payte-co) has become a conductor to watch. 2017-2018 marks his third season as Music Director of the Saskatoon Symphony Orchestra, he is also founder and Music Director of Toronto-based group of 27, Mr. Paetkau is known for his intense musicality and artistic excellence. Mr. Paetkau has conducted the Kitchener-Waterloo Symphony, Calgary Philharmonic, Saskatoon Symphony, Windsor Symphony, and Ontario Philharmonic, among many others.

With the dynamic and innovative group of 27, he’s produced a concert recording with JUNO award winning soprano Shannon Mercer on Centaur Records, recently released to critical acclaim, as well as a recording of Canadian concerti with bassoonist Nadina Mackie Jackson and trumpeter Guy Few on the MSR label. Both discs were nominated for two Classical Album of the Year categories for the 2104 JUNO Awards. The orchestra has also joined with Toronto’s Regent Park School of Music and Dixon Hall Music School to establish an outreach performance collaboration for Toronto’s at-risk youth.

Recently Mr. Paetkau held the position of Resident Conductor with Quebec City’s world-renowned Les Violons du Roy. He led the orchestra in over 40 concerts with repertoire ranging from the Baroque to the contemporary with soloists such as renowned contralto Marie-Nicole Lemieux, harpist Valérie Milot, and violinist Pascale Giguére. Mr. Paetkau has also conducted at a number of festivals including the Elora Festival and Ottawa’s Music and Beyond Festival.

As a violist, Mr. Paetkau was a member of the Nuremburg Symphony in Germany, and has played with the Toronto Symphony Orchestra, the Canadian Opera Company, the National Ballet of Canada Orchestra, Les Violons du Roy, and Tafelmusik Baroque Orchestra.

“This is the work of a master artist. In some places, it’s almost difficult to realize that it is only being played by 27
musicians, so full and rich are the textures, and Paetkau shows how good he is in shaping and pacing this music.” (Fanfare, Lynn René Bayley, February 2013 on group of 27’s JUNO nominated Centaur CD)

“The musicmaking was fantastic. The pieces played by the orchestra were impeccably rendered, with Paetkau shaping the music with a balanced combination of sensitivity and dramatic flair.” (Musical Toronto, John Terauds)

Culture builds community! A strong believer in this truism, Duff Warkentin has had a significant and varied career as a choral singer, conductor, clinician, and adjudicator. His first intensive experience as a choral singer came when he was a student at Rosthern Junior College. Here he also had the opportunity to conduct the choir in the absence of their regular conductor. His post-secondary studies include degrees from Canadian Mennonite Bible College in Winnipeg, University of Waterloo, and the University of Regina. He has served as Music Director at Rosthern Junior College, taught and conducted choirs for several years at the University of Saskatchewan, served as Choral Artist in Residence in the Battlefords and Rosthern, was the conductor of the Saskatoon Chamber Singers, conducted a number of church choirs, and is the founding conductor of the Station Singers of Rosthern.

Victor Sawa is a triple threat of talent, experience and personal dynamism in the orchestral world. A Montreal native, Sawa holds a Bachelor of Music with Distinction from McGill University and an Honours Masters of Music Performance from the New England Conservatory of Music. He is also a graduate of the Pierre Monteux School for Advanced Conductors.

Victor Sawa has been the recipient of many awards and honours, including three Canada Council awards for Conducting, a Grand Prix du Disque—Best Chamber Music Recording (Canadian Chamber Ensemble), a Grammy award (with the New England Ragtime Ensemble), and the Tanglewood Festival award for Outstanding Musician.